Focusing on the Financial Stability

The Reserve Bank of India (RBI) recently granted the National Asset Reconstruction Company Limited (NARCL) a licence, allowing it to begin operations as a bad bank, an organisation designed to take over and dispose off recognised stressed assets worth Rs. 2 lakh crore held by Indian commercial banks.

Banks will aggregate and consolidate stressed assets with NARCL for resolution under the new framework. To put it in simpler terms, this is like the government’s own asset reconstruction company for struggling Indian banks and public sector banks will own 51% of NARCL.

But, what is a bad bank and why does the Indian banking system need one right now? Find answers to these questions here.

A bad bank is a corporate structure that separates the banks’ problematic assets into a separate firm. It is created to purchase troubled banks’ non-performing assets at a price fixed by the bad bank.

In a phased manner, the NARCL will buy stressed assets worth around Rs.2 lakh crore. These stressed assets will be purchased with a 15% cash payment up front and the remaining 85% in security receipts. If there is a loss versus the threshold value, the government guarantees will be activated.

For the first phase, the banks have identified 22 problematic loans totaling Rs. 90,000 crores, which would be handed over to NARCL.

Padmakumar Madhavan Nair, a stressed assets expert from State Bank of India (SBI), will lead this so-called bad bank as its managing director. While Sunil Mehta, the chief executive of the Indian Banks’ Association (IBA), Salee Sukumaran Nair, the deputy managing director of SBI, and Ajit Krishnan Nair, a representative of the Canara Bank, will be the other directors on board.

So, how much Non Performing Assets (NPA) do Indian Banks have?

As of March 2021, the Indian banking system has bad loans totalling to Rs. 8.35 lakh crore. The figures below depict the breakdown of the NPAs in the various banks in India.

In fiscal year 2021, Indian public sector banks owed roughly Rs. 6.17 trillion in non-performing assets. This figure was substantially higher in the 2019 fiscal year, around Rs. 7.5 trillion, demonstrating a sluggish but steady improvement in India’s economy in terms of non-paying assets at public banks. 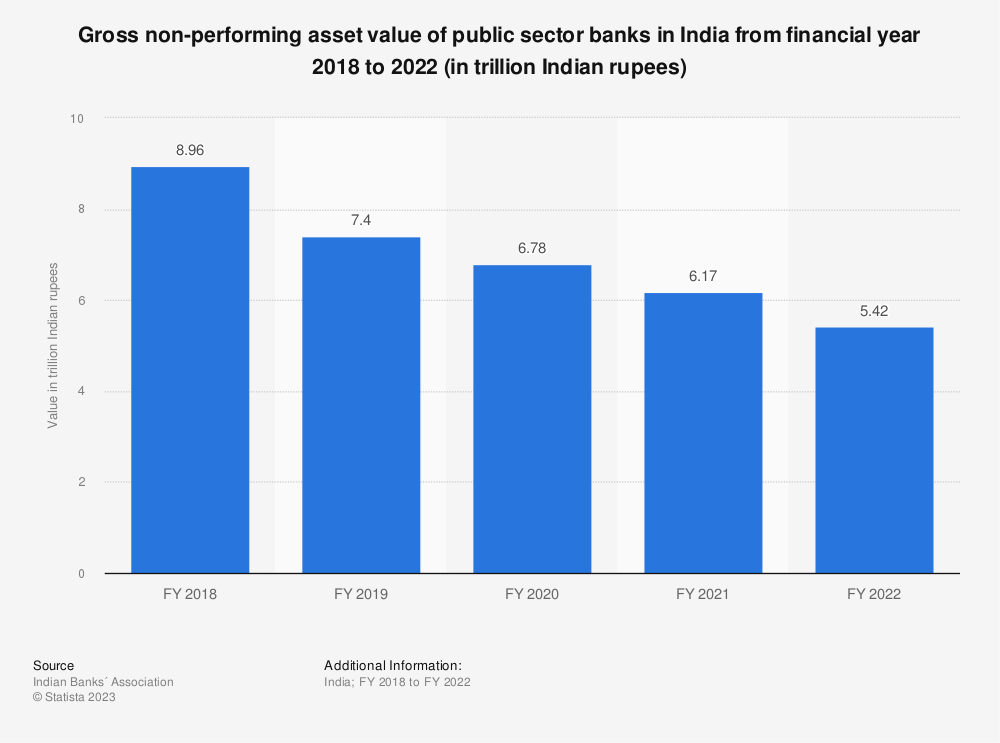 As of now, India ranks second after Russia in the global NPA ranking.

How do these NPAs affect regular citizens and businesses?

If a bank has high non-performing assets (NPAs), a large part of its profits would be utilized to cut losses. As a result, any bank with high NPAs is likely to become more risk averse and would be less willing to lend money to borrowers. It would become more difficult for businesses and consumers to take loans from banks, thereby impacting the overall robustness of the economy.

How will the banks recover these bad loans?

India Debt Resolution Company Limited (IDRCL) is a service company/operational entity established to manage the stressed assets acquired by NARCL, from all these struggling banks. It will engage with selected market professionals and turnaround experts for price discovery, value addition and sale of these stressed assets. State-owned financial institutions and public sector banks will have a 49% stake in this entity, while the rest by private sector lenders.

How do these stressed banks benefit from this move?

To begin with, it will incentivize these financial institutes for taking quicker action on resolving stressed assets. Because the sooner they sell off these assets, the better value realisation. It will also free up hundreds of bank personnel, who spend time managing these assets and will get them to focus on increasing business and credit growth of their institutes.

Additionally, it will improve the banks’ valuations and enhance their ability to raise market capital.

Which banks are a part of the NARCL?

Indian Bank has picked up 13.27% stake in the NARCL, similar to its contemporaries State Bank of India and Union Bank of India. Meanwhile, Punjab National Bank has bought a 12.06% stake in the “Indian Bad Bank”. Canara Bank too has shown interest in picking up 12%. This crucial step by the government shows great hope for the banking sector in India.

Stay in touch with White Ocean, the best financial advisors in Ahmedabad, India to keep receiving such interesting updates on the various financial industries of India and global happenings. Get guided by our team of financial experts on how to invest and grow your money with the right financial instruments.

Impact of IPL and the two new teams on Indian Economy

The Coal Crisis: How bad does it look for the Indian economy

Everything you need to know about NARCL, dubbed as India’s Bad Bank

4 underperforming sectors that are doing well in 2021

Structured solutions to sustain and grow...

We Are White Ocean

We are an Ahmedabad-based investment and financial advisory firm helping individuals, families and businesses in effectively and efficiently managing their finances, investment and further growing their wealth.